Asking three-time Indy 500 winner Hélio Castroneves to take it slow is like asking the dentist to skip the anesthetic. You could do it, but why? Castroneves is a three-time winner of the Indianapolis 500. He’s won 24 Hours of Daytona. He won the 2020 IMSA WeatherTech SportsCar title. His fancy footwork even helped him win Season 5 of Dancing with the Stars. Why would we ask him to put his comfy shoes on the brake pedal while he took us for a lap around the 2.4-mile Mid-Ohio Sports Car Course in Acura’s new TLX Type S?

Type S of Today and Yesterday:

We were invited to ride with the high-flying Brazilian for one short and sweet hot lap during IMSA’s big race weekend. It was his first time inside the new TLX, but Mid-Ohio is a track he won at in 2018, and again last year with Acura Team Penske. Listening to the air-cooled seats breath inside the TLX isn’t at all like being buckled into Acura’s 600-horsepower DPi prototype race car, but that didn’t mean Castroneves held back. 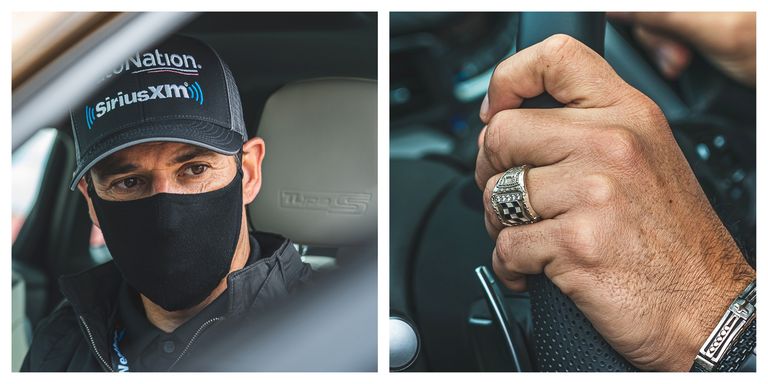 The new 355-hp TLX Type S, used as the pace car in Ohio, marks the revival of the more dynamic parts of Acura’s personality. The fun stuff with beefed-up suspension parts and more power. The official pace car has high-temp brake fluid, race brake pads, and Michelin Pilot Sport 4S tires. The car Castroneves chauffeured us in was closer to an actual production Type S. It was fitted with similar brake upgrades as the pace car, but instead wore the factory 255/35R-20 Pirelli P Zero summer tires offered with the lightweight wheel and summer tire package. Acura says the lightweight wheels trim about 21 pounds of unsprung heft compared to the standard kit.

Castroneves wasted no time flattening the pedal from pit row. We were immediately entering Turn 2, known as Keyhole, as he stomped on the big Brembo four-piston front brakes. The exit from Keyhole foreshadowed the rest of the lap; lots of speed with exceptionally good grip under cornering. Headed into Turn 4, where the IndyCar champ would normally be sailing at around 180 mph, we were just over 100 mph, but the brakes kept up and in Sport+ mode the 10-speed automatic delivered fast reflexes. This is still a luxury sports sedan, so while Castroneves painted a perfect racing line to the track edge, the ride was firm, the seats comfy, and the racetrack’s smell of VP Racing Fuels was left outside the quiet cabin. This was a cakewalk for Castroneves, and the TLX on summer tires didn’t harbor much restraint either. 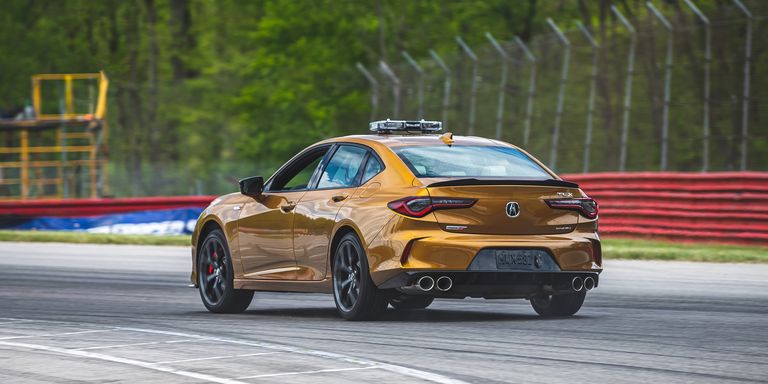 Exclusive to Type S models, Sport+ mode improves throttle response and makes the transmission upshift 30 percent quicker. It also tells the drivetrain to deliver up to 40 percent more torque to the outside rear wheel under cornering. The torque vectoring from the all-wheel drive system does its due diligence around this race course’s mix of ups and downs, narrow sections, and that infamous hilly left-hander. The momentum we carried through Turn 5, aptly named Madness, in this mostly-stock street car made us both laugh. To be fair, Castroneves could probably make an Amazon delivery van feel like a Mazda MX-5 Miata Cup Car, but the TLX passed the “guy with some really nice rings” test.

The TLX Type S doesn’t behave as big as it looks. Its spacious interior makes it feel roomy inside, but it’s brainy active suspension prevents this 4200-pound sports sedan from excessive movements. Acura’s Adaptive Damper System is the culprit behind this, and like Type S models of the past, the thicker anti-roll bars and springs over the standard model give it more confidence. The TLX Type S pace car doesn’t need to be pushed to nine-tenths to keep up with the field, but even on an out lap it behaves with far more enthusiasm than the previous car.

After returning to the pits Castroneves comes to a complete stop to give the next person a ride in the souped-up sedan, and the rear brakes lament the abrupt lack of cool air. Smoke starts to fill the spokes of the 20-inch lightweight Acura NSX-look-alike wheels. See what type of trouble happens when you ask race car drivers slow down? 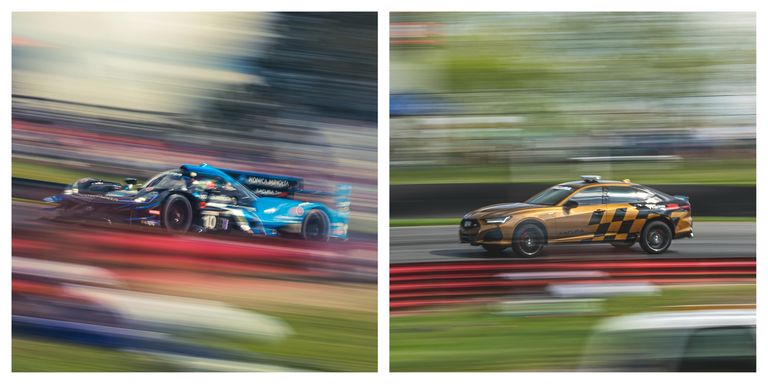 Later that afternoon Castroneves’ teammates finished first in the Konica Minolta DPi Acura Prototype. The Acura tent went nuts. Castroneves was bouncing around with excitement. Obviously happy for his team’s fourth consecutive win at Ohio, and maybe some extra hype from knowing next weekend he’d back in an IndyCar working on a fourth ring.

It’s Never Too Late to Learn to Drive

2022 Toyota Supra A91-CF Is Decked Out in Carbon Fiber

It’s Never Too Late to Learn to Drive

I Picked the Wrong Week To Drive Ford’s...

Subaru EV Will Be Called Solterra, Arrives in...

A Visit With the Men Salvaging Saab