Home Auto news Sam Correro Built the TransAmerica Trail on Accident, and with a Lot of Work
Auto news

Sam Correro Built the TransAmerica Trail on Accident, and with a Lot of Work

Sam Correro didn’t mean to create the Trans­America Trail, a backcountry passage across the United States referred to as the TAT by those in the know. In 1984, the pharmacist and motorcycle enthusiast just wanted to find a pastoral route for riding his dual-sport motorcycle across his home state of Mississippi, one that largely avoided highways and big cities. In his deep Southern accent and paced diction, he says that when he hit the Mississippi River, “I liked what I saw there. So then I started in Arkansas.”

It took truckloads of detailed maps to manage the challenges. Keeping off main roads made finding gas, motels, and water crossings difficult. Working state by state in his spare time, Correro spent 12 years laying out the original trail: about 4500 miles of rural pavement, dirt, and gravel roads from Tennessee to Oregon’s coast. Then he kept going. 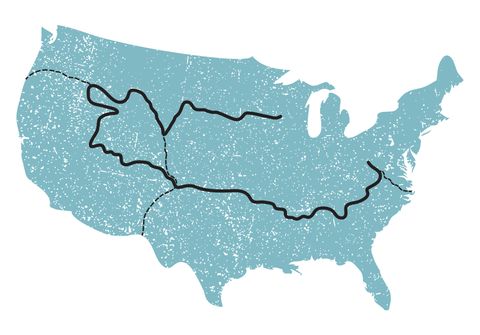 Illustration by Aya MortonCar and Driver

“I said, ‘Well, these riders living in the East, how in the hell are they going to get back home?’ ” He didn’t want them to simply repeat the TAT in reverse, so he started building a route back toward the East.

In the past 25 years, the TAT has grown by a few thousand miles. It now runs in a partial loop from West Virginia down into Georgia, west to Utah, and north to Idaho, then turns east and ends at the Wisconsin state line. The Oregon leg of the original route has since become a spur trail off the loop for those looking to hit the Pacific. Other spurs go from West Virginia to the Atlantic and from Wyoming to Texas.

If there’s a road that will get you lost, Correro has found it, then found the way back out. The landscapes include tiny country stores and gravel roads running past lowland farms out east, Dust Bowl trails (and deep mud, depending on the weather) through Oklahoma, and high-altitude farms and plains in Colorado.

“My driveway connects to the TAT,” Correro says. “Riders come to my yard, and sometimes they have laundry to do. I’ve got a gas grill if they want to cook some burgers or steaks or whatever they want. It’s turned out to be real good.”

He does what he can to help maintain the routes. When he gets word from a rider that a bridge is out somewhere, for instance, “I call the sheriff of that county and get the people who work on the roads and bridges and ask them about the bridge.”

The TAT isn’t limited to motorcyclists. People have navigated the trail in Jeeps and other overlanding 4x4s. Just make sure you bring a spare, as AAA will never find you.

When we catch him, Correro is in his truck scouting a connector from Arkansas to Minnesota. “My goal now is to have a loop all the way around the United States,” he says, which he hopes to finish by this autumn.

“It’s turned into a wonderful adventure,” he says. “You see parts of this country that people never ever see, all these mom-and-pop convenience stores and little restaurants and motels, and you just get a feeling of what this country is all about.”

This commenting section is created and maintained by a third party, and imported onto this page. You may be able to find more information on their web site.

Where Do You See Yourself as a Driver...

Some Night-Shift Workers May Have a 300% Higher...

Aston Martin Is Abandoning the Manual Transmission Even...